Back in November, I expressed my concerns for museums and their missions, were Donald Trump to be elected:

I posted that article several days before the election, and even though I hoped in my heart that the American people would choose the candidate who was most likely to continue to fight for their rights, no matter their religion, creed, color, gender identification, or heritage, I worried. Given the events currently unfolding on ‘Museum Twitter,’ it seems as though I was mercifully not alone.

After the National Parks Service account tweeted a photo comparing the crowd gathered for the first Obama inauguration with President’s Trump’s, the Executive Branch ordered for several federal government Twitter accounts to ‘go dark’ [2][3]. As of this writing, the Environmental Protection Agency’s account remains eerily quiet, the last tweet having been posted 10 days ago:

.@GinaEPA shares a report about actions taken by the agency under the Clean Air Act during the last eight years. https://t.co/6RRF8WWCj1

Equally newsworthy, however, has been Museum Twitter’s response to the social media restrictions. Several days after the National Park Service was slapped on the wrist for what the Trump administration must have considered a brazen commentary on their popularity, the twitter account for the Badlands National Park began tweeting facts and scientific data proving the veracity of climate change and global warming: 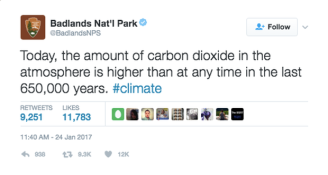 And although the administrators of the Badlands National Park twitter account have since shared that the account had been temporarily taken over by a former employee, these tweets began a surge of undeniable, unarguable, scientifically proven facts which has begun washing over the Twittersphere like a social media scientific revolution. This fact-spamming is largely thanks to the brave staff at various private government-run cultural and environmental protection institutions who have taken on the responsibility of deploying their most powerful weapon: truth.

In a fascinating turn of events, ‘Alt’ Twitter accounts have been formed by the concerned staff of many federal government agencies and departments as a subversive commentary against their social media muzzling. These include the National Weather Service, the National Park Service, NASA, and the Smithsonian, among others [6][7][8][9].

These accounts claim to be the ‘unofficial resistance,’ working to subversively push back against the policies their corresponding official accounts have been ordered to abide by. Fake or alternative Twitter accounts are not a new phenomenon–what makes these accounts different is that rather than being created as parodies or satires of the ‘real thing,’ many of them are hoping to be a platform for the factual information their official counterparts were previously free to share [10]. The intersections of fake news, credibility, sourcing and authority are mind-boggling.

Independent activists have also reacted to the pushback against media, social media and fact-sharing with their own powerful truth-telling practices, turning Twitter into a museum in and of itself. President Trump’s executive order to ban refugees from many countries with significant Muslim populations on World Holocaust Remembrance Day no doubt inspired the incredibly powerful, humbling and heart wrenching St. Louis Manifesto Twitter account, for example.

For the entire day on January 27th, the account tweeted the story of the ship’s Jewish refugee passengers, one by one. Each boarded the ship hoping to be granted asylum in the United States. Each was turned away. Most passengers were eventually sent back to continental Europe, where a significant number perished as victims of the Holocaust [11].

My name is Regina Blumenstein. The US turned me away at the border in 1939. I was murdered in Auschwitz pic.twitter.com/TZXJM2Ar94

Earlier this week, the Whitney Museum’s Speak Out on Inauguration Day event, co-hosted by Occupy Museums, proved to be an open and unapologetic protest of the new administration and the threats it has made against the arts. In the eyes of the arts activists hosting this event, the message was unified and clear: silence equals danger. Resistance is a requirement [12][13].

In other, weirder news, actor/failed graphic novelist/misunderstood genius Shia LeBeouf and the Museum of the Moving Image in Queens, New York have embarked on a 4-year long protest of President Trump’s policies. LeBeouf’s collaborative concept involves a screen on the outside of the museum which will play a constantly looping film of different people reciting the words ‘he will not divide us’ into the camera. This installation will last for the entire length of Trump’s term as President [14][15].

Some museums have actually been answering the call to stand up and resist for months. Among them is the Tenement Museum, whose director put out a statement immediately following the election expressing his concerns with the Trump administration’s position on immigration, given how vital the process has been in shaping the museum’s subject matter – the immigrants who made their homes in Manhattan [16].

The Japanese American National Museum also published a statement reminding the public of its dedication to protecting the history of Japanese American immigration to the U.S. [17][18] These examples are by no means the only two instances of museum resistance. Additionally, their immediacy indicates that they will be fighting against negative immigration and diversity narratives for the long haul. It should be a comfort that the institutions we rely on to preserve instances of human rights violations and the forgotten faces of immigration history will remain stalwart in their fight for relevance and truth.

And so, the resistance begins. The more museums commit to self-educating on the changing of policies relevant to support for the arts and preservation, the better prepared they will be for whatever fact battle they may have to fight in the future. It will also be vital for museum professionals to maintain advocacy for their freedom to uphold their missions online as well as in-gallery. Museums who feel that their missions are being challenged, or may be in the future, should steel themselves for a long, hard fight. We must maintain protection of the truth, above all else.

8 thoughts on “The Resistance is Us: Museums Get In Formation”

What I’m diving into.

What I Write About.

Where Museums, Heritage and History are always the main subjects!

A Forum for Reflecting on Practice

A memoire of sorts

A Step Through Time

A Journey To Places New And Old

THE ARTIST ALOZADE A. IS LOOKING FOR ALL BEAUTY IMAGES IN THE WORLD, FOR YOUR TRIP AND FOR YOUR PLEASURE. AS WELL AS ARTISTIC WORKS, DESIGNS AND HIS IDEAS ON ART

A blog about Greece, art, and life in general